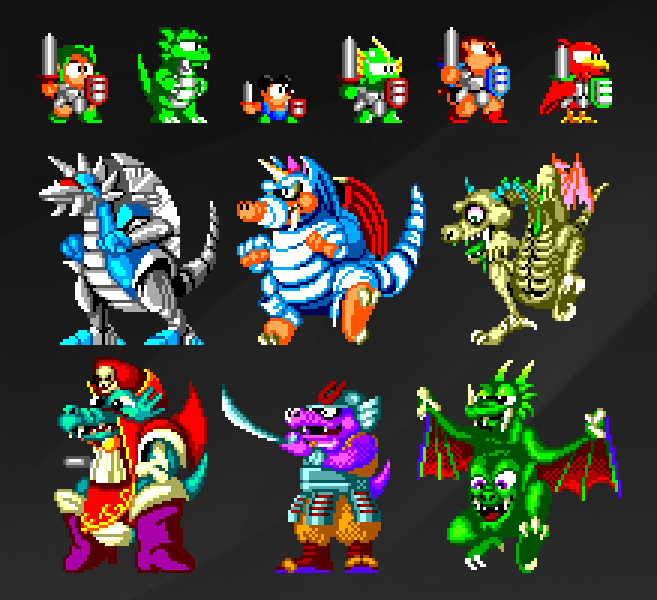 Video games were a big part of our childhood. Me and Andreas played a lot of games together, either hot seat against each other or taking turns with the controller. Many magical worlds were explored and countless bosses were slain. It was glorious.

The games we played when we were young still plays a big part in the types of games we enjoy to play and create today. So for you to get to know GNBW a little bit closer, let’s take a walk down memory lane and share some unashamed game nostalgia. The game I want to talk about today is Wonder Boy III: The Dragon’s Trap for Sega Master System.

The game starts in the lair of the Mecha Dragon (which interestingly enough is the final level of the previous game in the series). Upon defeating the boss, Wonder Boy is shifted into a fire-breathing lizard by a curse. To return to his original shape, Wonder Boy embarks on an adventure through the different parts of Monster Land to defeat the Dragons and claim their shape shifting abilities. Only by using the power of all the shapes can he obtain the Salamander Cross, which will return him to his original shape.

You begin your adventure in a small town, and this is where you are resurrected after dying. The adventure can be saved through a password system in one of the houses, so the town forms a base camp so to speak.

There are multiple ways out of town, each one leading to a different part of Monster Land. You get no obvious directions from the game, instead you are free to explore as you please without being pushed down a certain path. The game is of course designed so that you need to defeat the Dragons in a certain order. Only by using the shape you get from one Dragon can you progress to the next Dragon.

Coins, hearts, spells and charm stones are collected by slaying monsters and finding treasure chests. The coins can be used to purchase gear in the many shops which are sprinkled across Monster Land. By equipping different swords, shields and armor, Wonder Boy becomes more powerful in a stats based, light RPG kind of way. Certain swords and armor are also needed to pass through various obstacles in Monster Land.

Both graphics and music in the game are amazing. All the surroundings are vibrantly colored and populated by expressive characters, with each part of the world being distinctly different from the previous one. And the soundtrack contains lots of energetic and catchy songs to accompany you throughout your adventures.

Exploration, character progression through upgrades and shape shifting, beautiful and varied surroundings and catchy music makes this game a true classic. If you haven’t experienced it I highly recommend looking at the gameplay video below to get a glimpse of what you missed.

Wonder Boy III is a game which lies close to our hearts. So close in fact that our company name is inspired by it. Can you figure out in what way?

This game was so modern for its day! Clean non-dithered graphics, fun colors and big sprites.

The level design always kept you interested, often teasing secrets or levels that you could reach later. I still remember the first time we fell down a platform into the water; of course we thought we would die but instead there was a whole new world in the ocean. And then the constant search for the trademark hidden doors without any visual clues.

But what really made this game was the awesome soundtrack, getting you into the perfect groove while addictevely collecting the gold dropped from the monsters. I still whistle some of the tunes!